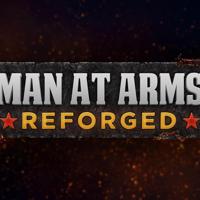 Man At Arms, from Baltimore, the best fantasy weapons black smithing group in the world. They have a 4 million subscriber YouTube channel. Matt Stagmer, host and bladesmith, has been making swords for 17 years. He is the lead blade grinder at Baltimore Knife and Sword. In the summer of 2014 he began hosting the hit web series MAN AT ARMS:REFORGED. Teamed with other talented craftsmen, he brings to life the most requested fantasy arms and armor from your favorite video games, anime, and other pop culture genres. Ilya Alekseyev was born in Troitsk, Russia. Since an early age he developed a liking to the art and craftsmanship of bladed weapons. He likes to bring his background in Art History, Asian Studies, and Philosophy into his craft. Ilya is currently an Armourer working with Baltimore Knife and Sword as well as one of the product designers. Among the skills that he brings to the Man at Arms project are his expertise in armour, damascus steel, bloomery steel, and engraving.