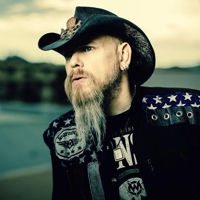 Jason has received two Gold Record Awards for sales. One for the Godhead song “Penetrate” on the Queen of the Damned movie soundtrack, and the other for the song “The End Has Come,” which he wrote and performed with Evanescence founder Ben Moody for the movie The Punisher. Jason also recently sang two songs on the critically acclaimed soundtrack for the video game Metal Gear Rising: Revengeance, and has even sung backup for Robert Smith of The Cure on the Reeves Gabrels/Robert Smith song, “Yesterday’s Gone.”

Jason has been featured in magazines such as Rolling Stone, Billboard, Guitar World, Inside Kung Fu and many more. He’s also appeared on MTV, MTV2, Fuse and VH1. Touted by many critics as one of rock and country’s best and most consistent live singers, Jason continues to wow live audiences all over the world.