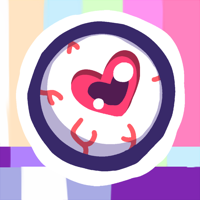 Creep-P is a western Vocaloid producer, based in New Jersey, who is known for writing songs that mix reality with the ideas of horror. Known for songs such as Mommy, Exorcism, and Love, he takes a hold of stories and movies and molds them to something that can be both horrific in concept, and in reality. He is someone who is heavily inspired by both the scary side of the internet and its stories, to the more light and bubbly aesthetic of relatively anything neon. He has collaborated with other Vocaloid artists, such as Circus-P, GHOST, Yunosuke, and BIGHEAD. Finally, he has released his first album, TV, which to slowly follow up with his sophomore album in the near the future. As well as that, his personal fashion has been grabbing the attention of some popular brands, such as Puvithel and Yokai Candy; as well as being featured on NHK World’s Kawaii International with his over the top style!