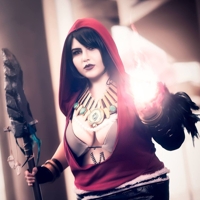 I have been cosplaying for about 4 years, and have recently begun making my own costumes and props. I love to cosplay characters from anime and video games, but have recently gotten into comic book cosplay too! I attend East Coast conventions exclusively at the moment, such as: New York Comic Con, Anime Boston, PAX East, AnimeNext, Otakon, and Katsucon. Would love to eventually travel to other parts of the country and go to other cons as well!