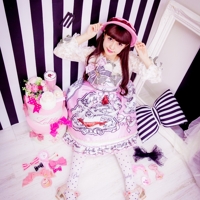 Misako is a Japanese lolita fashion model and ambassador of kawaii pop culture, and since 2013 the President of the Association of Japanese lolitas. She debuted as a model while she was studying nursing, and has represented Japanese lolita fashion through the magazine KERA. In March 2009 she was appointed by the Ministry of Foreign Affairs of Japan as “Kawaii Ambassador” representing Lolita fashion, in order to disseminate this trend globally. In February 2013 she founded the Japanese Lolitas Association, Nihon Lolita Kyoukai, to strengthen ties with people interested in Lolita fashion worldwide. She has modeled in outfits for several brands including BABY The Stars Shine Bright, and Angelic Pretty.