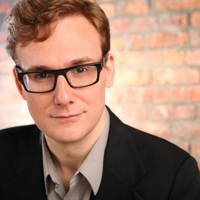 Abe Goldfarb is a New York actor, writer and director. His voice is a regular fixture on Pokémon, most prominently as Dr. Xerosic and Professor Kukui. His voice can also be heard in numerous games by the developer Wadjet Eye. As an actor, he trained at the Bristol Old Vic Theatre School. His stage work includes such companies as the Hudson Valley Shakespeare Festival, the Pumpkin Pie Show, and the Jean Cocteau Repertory. He can be seen and heard in commercials for Kraft Ranch, State Farm, Adult Swim and Papa John’s. His film and television work include the upcoming IFC web series Neurotica and the feature Women…and Sometimes Men. His feature directorial debut, The Horror at Gallery Kay, is currently in post production. He MCs burlesque and variety shows all over the world under the pseudonym Bastard Keith, and was the first artist to be ejected from the Plaza Hotel for indecency. He is aware that his life and work are utterly absurd, and he feels pretty lucky about it.