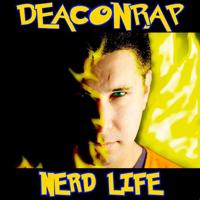 DEACONRAP was born on october 4th, 1993. At the age of 3, his love for music began when he memorized all the words to snoop doggs gin and juice and ac/dc’s highway to hell. As he grew up he loved listening to music and at the age of 10 discovered mtv’s morning music videos. Shortly after, he saw the movie 8mile for the first time and then made it his life ambition to become an established rapper.
He first started taken gospel poems and reciting them in rap format at different church events all over San Antonio. Him and his father were very active at his home church, True Vine Baptist church, lots of people called him, “little deacon”. After his father told him to take up the name “reverend rap”, after learning that joey run of run dmc changed his performing name to reverend run, deacon took that idea and named himself, “DEACONRAP”.

At the age of 16, he got his first guitar and eventually joined the youth musicians at his home church. By the age of 18, he was able to play the guitar, bass, piano, drums, harmonica, and violin. He also has a love for video editing. In middle school he discovered microsoft paint and windows movie maker and by the time he graduated high school was able to use complex programs such as, adobe premiere, Photoshop, and after effects. During DEACONRAPS second year of working at sea world. He performed in an employee talent show and won the peoples choice award for his performance of “ice ice baby”. It was after that that he began performing in local bars as a vanilla ice impersonator. In 2015, he did the talent show again and won first place for a performance of lose yourself by Eminem. From that point he began marketing himself as an Eminem and Vanilla ice impersonator.

Later in 2015, he began writing his own non-gospel music and had the idea to rap about the nerd life. Using all of his 2016 and 2017 tax return, he invested in studio time and recorded his first studio album that he calls, “Nerd Life”. On October 4th, 2017 the album will be available on iTunes and November 4th, the album release party will take place at Otaku Fair Game and expo. Then in 2018, he’s going on a 52 comic con tour all over the united states, which he calls, “The new 52 Tour”.