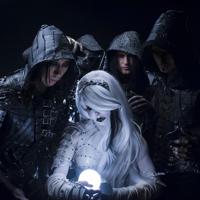 September Mourning is a dark culture, fantasy that resides in the pages of a comic book published by Top Cow/Image Comics and comes to life as a musical art project on stage. Created by Emily Lazar and comic book legend, Marc Silvestri, the comics “A Murder of Reapers” and “The Hand of Fate” (collectively “Volume I”) tell the tale of September, a human/reaper hybrid with no memory of her past. Empowered with supernatural gifts, she is driven to protect humanity from Fate and his Reapers.

The musical accompaniment to this story is a full length album, “Volume II”, released on Sumerian Records. The songs written by co-creator, Emily Lazar, give more depth and insight into September, revealing her innermost thoughts and feelings. On stage, Lazar also personifies the character of September, accompanied by her band of Reapers. Together they have performed at such notable events as Download (UK), Rock on the Range (Columbus, OH), Aftershock (Sacramento, CA), Comicpalooza (Houston, TX), AC Boardwalk Con (Atlantic City, NJ) and many more. Currently, September Mourning are preparing to unveil the next chapters of the story and music, set to be released in early 2018.