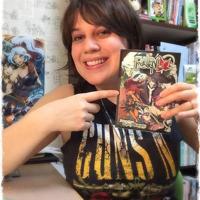 Ogawa Burukku is an American artist who in 2004 moved to Japan to study manga at the Nippon Designer Gakuin and work on her Japanese language abilities. After graduating with honors, she ended up staying in Japan to get work as an assistant manga artist and translator. Since then, she has worked with both Japanese and American studios and publishers as a manga artist, illustrator, storyboard artist, and translator, as well as occasionally lending her voice for narration and vocal jobs.

Up until September of 2012, Ogawa Burukku had worked on other properties or short projects (one-shots, or yomikiri), but FaLLEN was her first ongoing project, and she’s been working on it almost exclusively ever since. It started out as a webcomic but has since been published independently in paperback form, thanks to funding by readers through Kickstarter. The project is a dream project of hers that she has been developing since high school, with the idea that she wanted to create an alternative magical girls series featuring an atypical lead with elements that could appeal to both male and female readers. “It’s the series I wanted as a kid but never got to have… so I made it myself!”