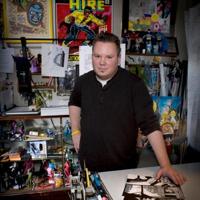 He is a noted comic book artist, illustrator and painter— his work has been published all over the world and exhibited in galleries as far away as Sydney Australia. One of his paintings is in the collection of the National Gallery in Washington DC. Andy studied with Will Eisner, Jack Kirby and Paul Ryan as he learned the craft of comics and graphic novels.

JUL 2018 – Andy is working on BLACKWOOD with his wife Veronica and writer Evan Dorkin. Andy and Veronica are handling all of the art, coloring and lettering for the book which is being published by Dark Horse Comics.

In 2017 Andy launched BATMAN THE SINISTER SIDESHOW OF DR SCORPIO which runs as an internet strip and is updated once a month.

He is also continuing work on SINISTRE for an independent publisher and is developing his next graphic novel set during the dust bowl called RAIN.

Previously Andy completed the online pulp inspired Batman comic strip THE DEATH RAY OF HUGO STRANGE to much acclaim. 13th Dimension called it “The Best Batman Comic DC Never Published” which is kind of praise for it I guess.

Andy holds the record for consecutive years as an artist mentor for ART ALL STATE after participating with them for a decade before hanging up his brush.

Andy was a popular instructor at the Worcester Art Museum from 1999 to 2014 when he left due to a disagreement over the direction of the institutions art classes for serious high school students.

Andy is the author of five HOW TO DRAW art books for Chartwell Publishing in London.

Andy is previously a professor of Graphic Novel Studies for Emerson College in Boston.

Latest print book; GEEKS AND GREEKS with the hilarious and brilliant Steve Altes which went to print in late summer 2016.

That’s Entertainment recently published INSECT MAN’S 25th ANNIVERSARY EDITION which was Andy’s first professional work back when he was only 17 years old.