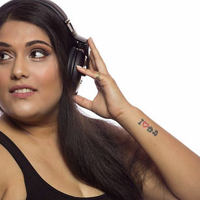 Having been called the “House Queen of the DMV,” Confetti The First lays down multi-genre electronic music like it’s encoded in her DNA. Her high-energy, fun sets light up the dance floor and will leave you a hot mess begging for more! Having established herself as a household name in the EDM scene in the greater Washington, D.C., Maryland, and Virginia area, Confetti The First brings the beats that will make you dance all night long.

In her time behind the decks, she has performed at venues such as U Street Music Hall in Washington, D.C., Flash in Washington, D.C., Soundstage in Baltimore, MD, The Paradox in Baltimore, MD, Empire in Springfield, VA, Ultrabar in Washington, D.C., and more. She has performanced at numerous large festivals including Big Dub Festival, Otakon Anime Convention, Unified Field of Consciousness, Flower of Life and has been booked by event companies such as Badass Entertainment, Panaroma Productions, Symbiotic, NU Androids, and Give Productions. She has had the pleasure of sharing lineups with names such as DJ Micro, Elite Force, Helicopter Showdown, Baggi Begovic, DJ Venom, DJ Shiftee, Designer Drugs, Wes Smith, Laxx, Nina Las Vegas, KITTENS, Sam Divine, and Black Tiger Sex Machine.