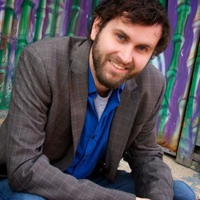 Ian got his start doing voice work when he visited Funimation Studios as a college student in 2004. A director asked him if he’d like to jump in the booth for a one-liner. Unbeknownst to that poor director, that insignificant character ended up being an extremely small, yet still recurring, role. He had to be called back in.

A Dallas native, Ian graduated from TCU with a degree in Theatre, returned home, and began his career as a stage actor where he won awards such as Best Local Actor in Dallas of 2009. He continued at Funimation, gradually working his way up from one line characters until his break as Dallas Genoard in Baccano!, a show which he Assistant Directed. Since then he has performed in roles such as Toraji Ishida in Bamboo Blade, Douglas Rosenberg in El Cazador de la Bruja, Sobi Nakajima in Linebarrels of Iron, Haruki in Master of Martial Arts, Akoz in Casshern Sins, Kaoru Seo in Sekirei, Shinze Kamiu in Shikabane Hime, Liam in Fullmetal Alchemist: Brotherhood, Ginei Morioka in Rosario + Vampire , Marc Cole in Spice and Wolf II, Toyama in Oh! Edo Rocket, Bora in Fairy Tail, Romano in Hetalia, Shu Koibuchi in Princess Jellyfish, Tatsumi in Shiki, Bardroy in Kuroshitsuji (Black Butler), and most recently Ryner Lute in Legend of the Legendary Heroes.

As a director, Ian has worked on Initial D, Spice and Wolf II, both seasons of Black Butler, and a few others he can’t talk about… yet. Additionally, Ian can be heard in numerous radio/TV spots, as the voice of Baron Flynt in the video game Borderlands, and as the “Cool” custom voice in Dragon Ball Z: Ultimate Tenkaichi.