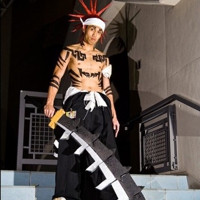 FanService Renji began his creative journey in Jr. High where he excelled in writing and had a passion for music. After spending his free time writing and recording on a homemade setup built on old stereo equipment from friends and family, Renji pursued his dream career in audio and entertainment Renji attending and graduating from Full Sail University with a degree in Recording Arts. After a short stay for college in Orlando, FL he returned home back to Michigan.

After returning home he co-founded an independent record label, Northern Exposure Records (NER), to create a local entertainment scene in a market that was labeled hopeless. With NER by his side Renji expanded his resume to include recording engineer, event producer, promoter and artist manager. Being a nerd at heart, Cosplay quickly became a new love in his life. Not wanting to live in two separate worlds, Renji shifted his entertainment focus on the the Anime/Otaku world. Now he is a performer at various anime conventions across the U.S. You can catch him live singing his original brand hip hop, dancing on stage at the rave as one of the official dancers or rocking out in one of his music videos on youtube.