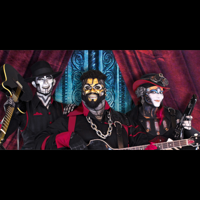 The robots of Steam Powered Giraffe are like nothing you’ve ever seen. The malfunctioning joke-spewing metal men play a collection of original Vaudeville inspired tunes fused with modern flare and executed in a super-sleek, one-of-a-kind performance. More than just a band, Steam Powered Giraffe is an experience that must be seen and heard by the entire family.

The artists behind the SPG robots started street busking as these quirky characters back in January 2008 at Balboa Park, California, instantly drawing the attention of Southern California. They have since performed at such venues as The San Diego Fair, The San Diego Zoo, The Wild Animal Park, Legoland, Ontario Mills, and numerous Sci-Fi, Fantasy, and Steampunk Conventions.

Their act combines the visual of robot pantomime with sketches, pop culture references, improvised comedic dialogue, and of course, original music. From their heartwarming nostalgic melodies to their funky cabaret rock, Steam Powered Giraffe’s songs are memorable, infectious, and as unique as the robots themselves.